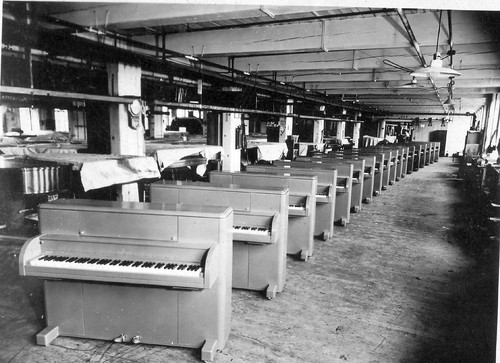 Note: This is the first post in a series in response to the recent explosion of articles and posts on the value and lifespan of pianos.

A few weeks ago, a New York Times article on the increased frequency of pianos being consigned to the dump created quite the brouhaha on the internet.

My Google Alert for “piano” exploded as a multitude of other news sources provided their own commentary on the issue, along with the reactions of the general public as they started discussion boards and wrote letters to the editor with their own opinions on how pianos that have reached the end of their life spans should be treated. Weeks later, follow-up articles, blog posts, and published letters to the editor on the issue still pop up on my Google Alert with regularity.

The prevailing responses have been of horror, blaming adults for quitting the piano lessons of their youth, decrying the barbarism of shoving pianos backwards into a dump, lamenting our fast-paced society that throws anything away at the drop of a hat, and filled with plaintive wails of,

“WHY CAN’T THEY BE DONATED TO [insert worthy non-profit organization here]?!?!?!”

I have witnessed said horrified reactions numerous times, most recently when a person banged on the door of the piano shop where I work and wanted to know if he could have the piano sitting outside by the back dumpster.

Even upon hearing the the piano was so infested with mites that it was not allowed into the store, a building filled with wooden floors and 300+ pianos (valuable instruments primarily made of wood), the concerned man would not relent. He was appalled that we were going to throw the piano away, and aghast at our refusal to let him have the instrument.

The case and wooden parts of the playing mechanism of this particular piano were destroyed and the bugs living in the wood that remained could lead to a mite infestation in his home.

Nevertheless… Oh, no. It was a piano. How could we possibly throw it away when he would so generously take and “save” that which could not be saved because it was already destroyed. 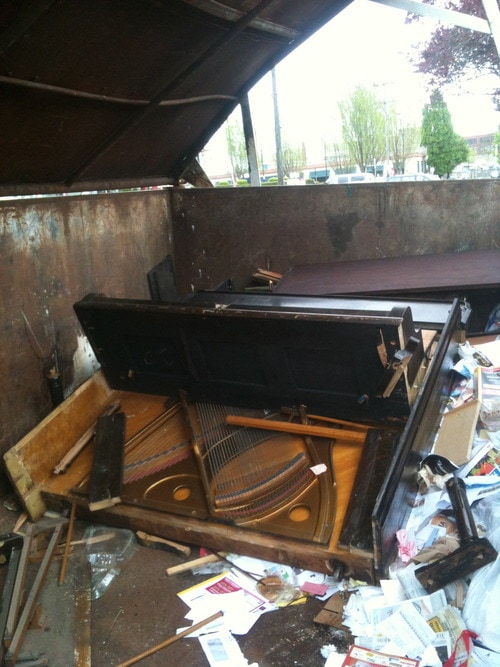 I must admit that I find such reactions somewhat perplexing, for a variety of reasons.

Most people would be surprised to hear this, as I am a lifelong piano player AND rely on the existence of pianos for my income. I, of all people, should support saving every piano in the free world. I should stand guard at every dump in America and stand in front of every piano that people try to throw away.

What people need to understand is that the dumping of pianos is not done thoughtlessly or callously, like the unceremonious tossing of a perfectly functional iphone as soon as the newer, sleeker model appears. People who decide to throw pianos away are not, in fact, heartless beasts who have no appreciation of art, music, or craftsmanship.

Rather, the opposite is true. They are generally experts who make the decision to dump a piano as a last resort after a careful examination of the instrument. It is only after evaluating the instrument and determining that fundamentally, the piano cannot be saved, that the death knell is sounded. 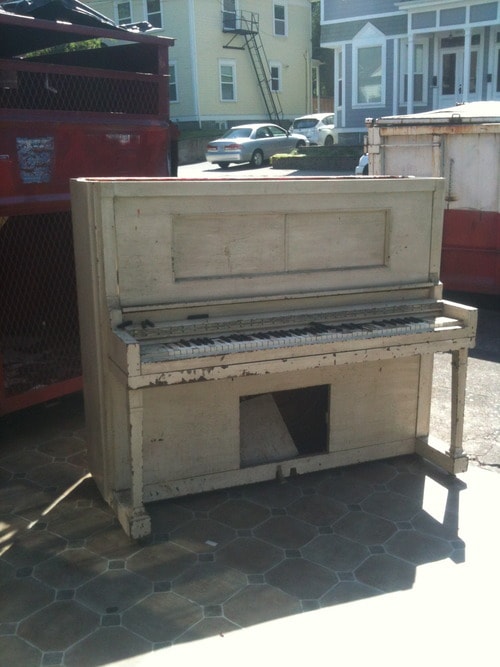 Okay, I know some of you are still thinking,

“But…but…but…can’t you just donate them? Think about the tax breaks! And what about the churches?! The schools?! The children?! Oh, God, the CHILDREN! They’ll totally shower you with gratitude over a free instrument!”

Would you shower someone with gratitude if they gave you something that takes up a lot of space and doesn’t work at all?

That has a cracked soundboard, resulting in a heinous buzzing noise every time you press a key? That won’t play because the majority of the keys are broken, or numerous hammer shanks are broken, or dozens are strings are broken, or the wooden parts have swollen so much that the majority of the keys stick? That no matter how much you pay a technician, will not stay in tune because the tuning pins are too loose, or the plate is cracked, or the bridges (the sections that transfer the vibrations of the string to the soundboard) are cracked, or the pinblock (the part that holds the tuning pins) has completely separated from the back of the piano? Really? You’d really appreciate that?

“Yes, Laura!” a few of you are still thinking, “I would TOTALLY appreciate that! After all, that can all be repaired, right?

I admit that the simple answer to that question is yes.

However, the real answer to that question is yes*.

“If you want to spend more money on the piano than it is worth, especially considering that the worth upon examination by piano experts is $0.00.” And, “If you don’t mind that the cost of rebuilding the instrument will be greater than the value of the piano even after all the work is done.

“But Laura!” a couple of you are still wailing, “I don’t care about how the piano looks! Or sounds! I just need a starter piano for my kids to learn Mary Had a Little Lamb! I just want it to play!”

Well,  “just playing” still requires paying a technician to replace the broken parts, or repair the ones that can be repaired. And paying the technician to repeatedly come back to repair other parts that weren’t already broken, but then broke in the interim, as old parts are wont to do. And putting up with a piano that doesn’t sound good and never will because it won’t stay in tune. And putting up with a piano that feels uneven because the variation in parts and lack of regulation makes each note respond a bit differently to the fingers, which makes playing unpredictable. 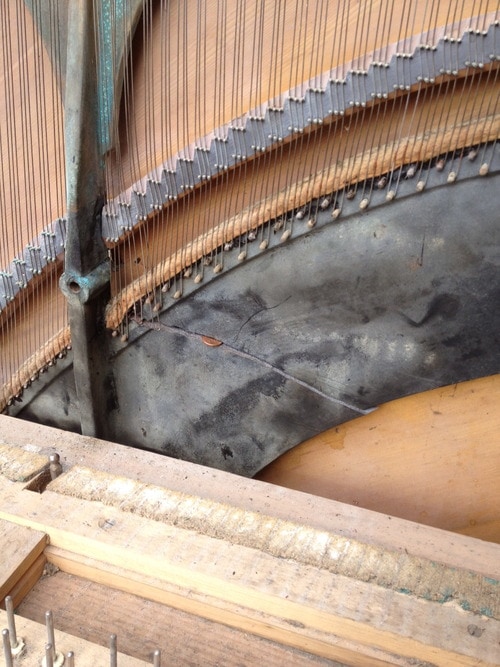 As a piano player, I can tell you that fostering a love for piano playing is often difficult.

Learning to play requires concentration, discipline, and hard work. Therefore, it is of paramount importance that a piano student not have a piano that just plays, but a piano that plays well enough to facilitate, rather than impede, the learning process.

I love pianos, and I love that there are still scores of people out there interested in learning how to play the piano, as well as scores of people out there who still find pianos worthy of having around. But expecting a child, or an adult student, for that matter, to enjoy making music on a piano that sounds bad, full of keys that stick, and feels uneven or unresponsive, is a losing proposition. All that kind of piano does is make practicing and learning a frustrating, unpleasant experience, the type of experience that non-sadistic people (the majority of people I think? I hope?) try to avoid. 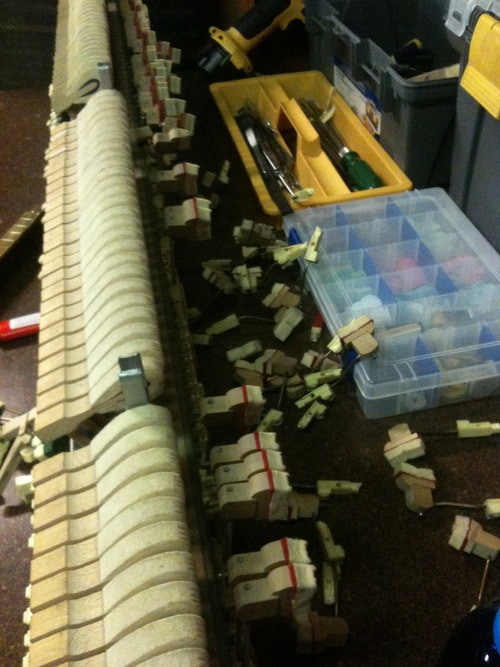 So the next time you see a piano in line for the dumpster, instead of accusing the dumpers of being callous grinches, give the instrument a salute for providing music for generations, and remember that there are dozens of other pianos, both used and new, in lovely condition just waiting their turn to do the same.

COVID-19 Service Alert: We are preparing to resume service calls soon—sign up for the priority list to be contacted for an appointment.